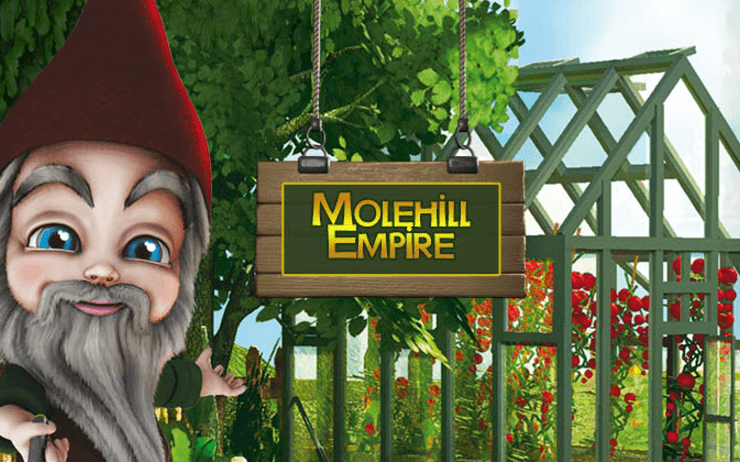 Be a dwarf and handle your own garden in the economy simulation named Molehill Empire. Plant different fruits and vegetables in your garden, do your own business and make friends with your neighbours. Lets go! Find more information about Molehill Empire!

Molehill Empire is a free browsergame, a good combination of strategy and economy simulation game located in your own little garden. As a free browsergame you can play it directly in your browser without having to download any software on your computer.

Your are a little garden gnome named Willi Wurzel and will create your own little garden paradise while playing Molehill Empire. You will have to plant, seed, water, harvest and deal: you can choose between 39 different sorts of fruits, vegetables, herbs and plants such as tomatoes, onions, strawberries, carrots or salad.

Reach one level after the other and activate different plants, decorations and quests. Yes, this is the truth: when playing Molehill Empire you can execute a lot of different quests to earn some more Wurzeltaler. Visit the town Wurzeltal to deal with other players, to buy new garden decoration or plants, fulfill the needs of your customers and make friends with your neighbours. Otherwise it may be possible, that one of your neighbours places a mole in your garden.

You dont have any experience in gardening?
No problem, I will give you a spade and a watering can. Come on, I will show you everything you will have to know to create your own beautiful garden, your own Molehill Empire! Molehill Empire is an awesome browsergame for young and old people. It ist suited for kids as well as for senior generations. Molehill Empire means a lot of fun, many funny hours on the internet, amazing graphics and a lot of nice players.

Consecutively we will show you some screenshots taken from the browsergame Molehill Empire. How does such a garden look like? How does the Wurzelstadt look like? What can buy in a typical shop? Look at the screenshots and you will get an idea.

Molehill Empire is a fun economy simulation, revolving entirely around the microcosm garden. As free browser game it runs entirely in your web browser, without any additional downloads or software!

Given the task of an industrious garden gnome, you will be able to create your very own private Garden of Eden. Lettuce, carrots, strawberries, spinach or onions – it is up to you which plants you want to grow. Visit the friendly towns of Green Valley and Hedgerow Ville to trade with other players, purchase new plants and decorations to spice up your own garden, deliver your customers orders and always make sure to be a good neighbour … or you might wake up one day to find your garden infested by an army of moles.